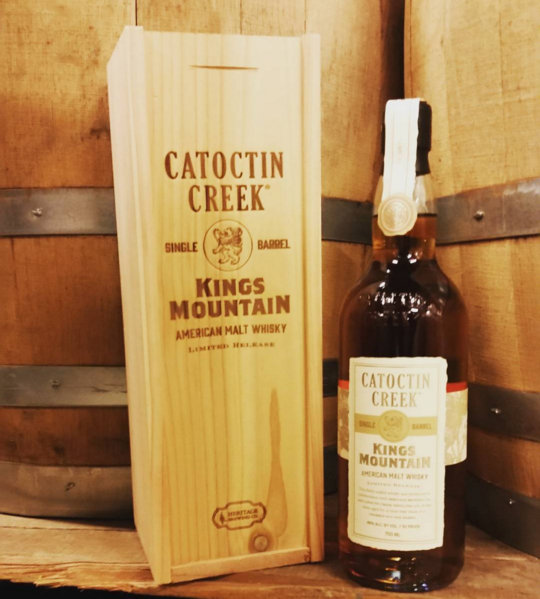 Our FIRST EVER American Malt Whisky!  A must-have for the collector!

Coming February 20th! Our first ever American Malt Whisky! Brewed in collaboration with Heritage Brewing in Manassas, Virginia, this limited quantity whisky will be available on a special release day along with its sister beer, the Kings Mountain scotch ale, aged in Catoctin Creek whisky barrels! Only 344 bottles of the whisky were made.

This whisky is the purest expression of Heritage's Kings Mountain beer, and it is remarkable to see the close relationship between the whisky and the beer. There is a recognizable barley sweetness in the beer, and that carries through note-for-note in the whisky. The whisky is highly aromatic, and reminds one of fields of lavender on a bright sunny day. After the first sip, the whisky settles in at a very comfortable 92 proof, and the malty goodness lingers forever. It is a fine sipping whisky, made from a fine sipping beer.

The event will kick off at Magnolias in Purcellville, where Heritage will have a tap takeover. There, you can sample the beer, then mosey down the street to Catoctin Creek and pick up your bottle of Catoctin Creek Kings Mountain whisky. Both Scott and Sean, owners of the two companies, will be on hand to sign bottles, visit and answer questions.

SEP - OCT 4th - 9th   Art of the Cocktail Class – This time, we're ONLINE! 7:00pm—9:00pm Catoctin Creek is pleased to present, our SIXTH year of this six-part educational series on the...