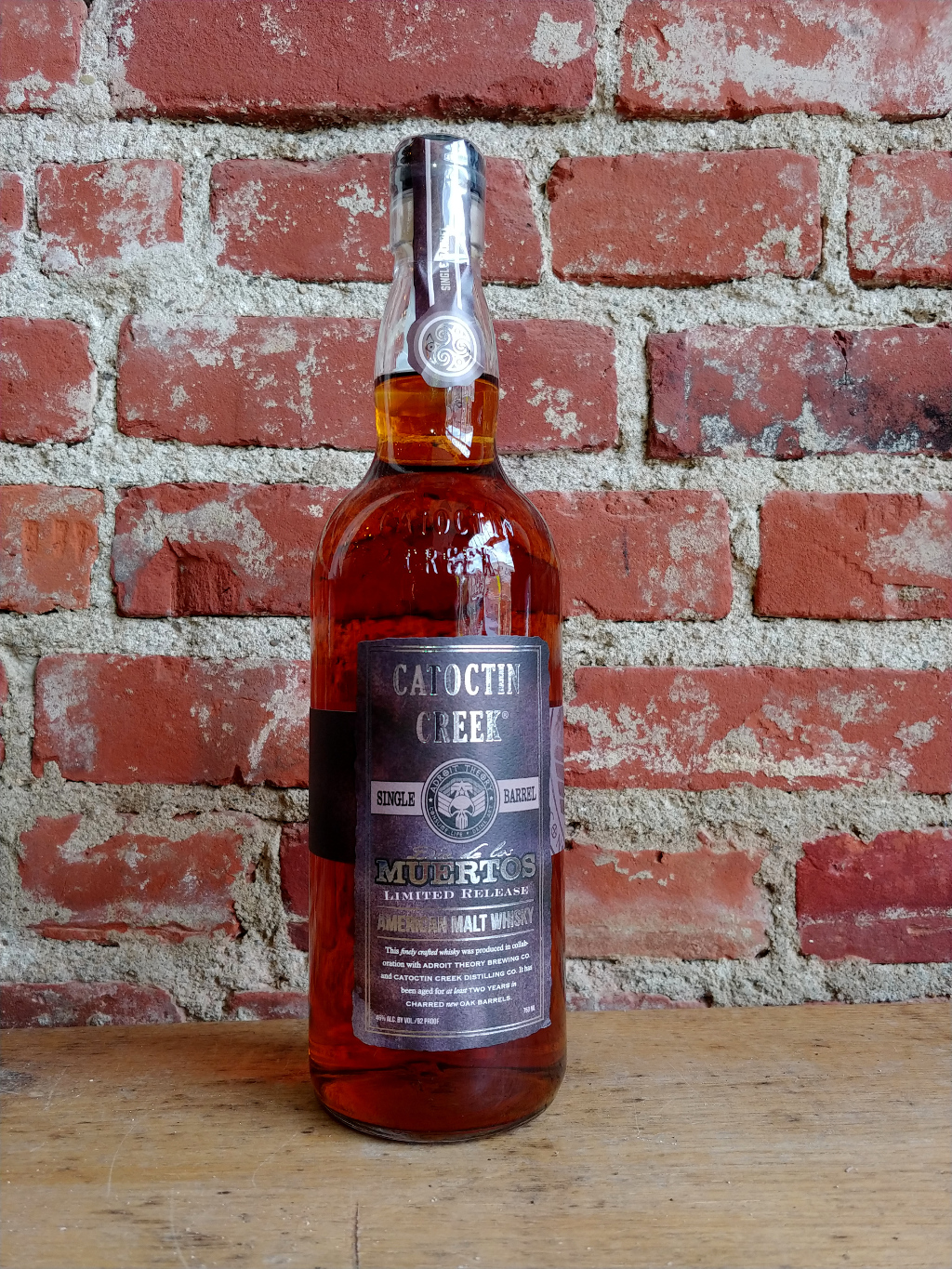 PURCELLVILLE, Va. (June 14, 2019) - - - It may only be summer, but the Day of the Dead is approaching! Catoctin Creek Distillery has collaborated with neighboring brewery, Adroit Theory to produce its second batch of Día de los Muertos, a sinfully delicious malt whisky. Catoctin Creek’s oldest whisky release to date, Día de los Muertos is extremely limited, with only 147 bottles available at the distillery’s tasting room on Saturday, July 6 from noon to 1 p.m. Catoctin Creek chief distiller, Becky Harris and Adroit Theory owner, Mark Osborne will be on-site to sign bottles and chat with guests.

“We’re very excited about the launch of Día de los Muertos whisky with the help of our friends at Adroit Theory, aka the evil mad genuises of the local beer world,” said Catoctin Creek co-founder and general manager, Scott Harris. “Due to the terrible ‘angel’s share’ in Virginia, there was a ton of evaporation on this spirit in the barrel. The good news is that the resulting alcohol is super-concentrated and especially delicious. The bad news is we have less to sell. But trust me when I say you’ll want to get your hands on it.”

Adroit Theory’s Día de los Muertos Russian Imperial Stout was aged and distilled by Catoctin Creek for “4.6” years in Minnesota white oak barrels. At 92 proof/46% ABV, the resulting Día de los Muertos whisky is full-bodied, rich, and overflowing with bold notes of caramel, chocolate, malt and honey-rubbed leather. Each bottle comes with a custom-made cedar gift box and will be available at the Catoctin Creek tasting room only for $159.99/750mL beginning July 6. Limited to one bottle per customer.

In addition to the launch of the wicked whisky, Adroit Theory is releasing a limited- edition Russian Imperial Stout used to make Día de los Muertos, aged in Catoctin Creek maple whisky barrels. Only 190 bottles featuring a hand-made cedar box will be available for purchase.

"Día de los Muertos Russian Imperial Stout holds a special place in our (black) hearts,” said Adroit Theory owner, Mark Osbourne. “It is the perfect balance between bitter and sweet and is as complex as it is drinkable. When we had the opportunity to have this beer distilled into a whisky, we were thrilled. We've tasted the final whisky and to say it is amazing would be an understatement. We decided to brew a new version of our Día de los Muertos Russian Imperial Stout and age it in Catoctin Creek Maple whisky barrels, just for this release. The result of that aging is a decadent, full-bodied brew with spice and dark dried fruit on the nose, dark chocolate, coffee, caramel, roasted grains, and a boozy, yet smooth finish."

About Catoctin Creek Distilling: At Catoctin Creek Distilling Company, 120 West Main St., True Craft is Inspired by Tradition.℠ Founded by Scott and Becky Harris in 2009, Catoctin Creek made a name for itself as the first legal distillery since prohibition in Purcellville, Virginia’s Loudoun County. The craft distillery is home to Virginia’s most-awarded whisky, Roundstone Rye, which has been presented gold medals across the globe and stands out through its old-world production methods. Catoctin Creek prides itself on sourcing rye whisky, gin, and seasonal brandy from local and organic grains and fruits, with spirits available in 26 states and 3 continents. The Harris’ intricate attention to detail results in high quality internationally-acclaimed products, including seasonal releases and private cask offerings, that recognize the true craft of Virginia spirits. For more information, call (540) 751-8404 or visit www.catoctincreek.com. Follow Catoctin Creek on Instagram, Twitter and Facebook.

About Adroit Brewing Company: Adroit Theory Brewing Company, 404 Browning Court, is a nano brewery located in Purcellville, Virginia. Since its inception in 2014, owner Mark Osbourne has continued to "push the envelope" in terms of what can be done with beer. From extensive barrel aging, revolutionary brewing techniques, or exotic ingredients and adjuncts, Adroit Theory has made genre defying beers. As a small brewery, it has flexibility in its experimentation; often making as little as one keg of beer at a time. Adroit Theory does not have "flagship" beers. Instead, it elects to produce an ongoing series of “one-off" beers. In its five-year history, it has made well over 750 distinct beers, with an emphasis on esoteric beers. Visitors to its tap room will often be greeted with 30+ choices, but those selections change often. For more information, call (703) 722-3144 or visit Adroit-Theory.com.