We made it!  2021 is in the rear view mirror!  Thank goodness!  Here's hoping your 2021 will be better than last year, and we'll all stay healthy and warm.

A Brief History of Virginia Rye Whisky - by Scott Harris

Taking a little time to reflect on history this past few weeks.  We thought you might enjoy our perspective on rye whisky and why we do what we do.

When colonists came to America, the first permanent British settlement was Jamestown, Virginia in 1607.  (Over 400 years ago!)  Immediately, during that time, colonists started making whisky from local grain, most famously (but not exclusively) by George Thorpe.

The style of distillation at this time was necessarily small scale... small home-sized pot stills using local grain and family recipes.  Today, we would call this "craft" but back then, it was just one of the necessary chores of the family homestead or farm.  [Ref: Every Home a Distillery by Sarah Hand Meacham]

The whisky of that time, predominantly made from rye–the local grain–was influenced by region, terroir and local practices.  [Ref:  The Practical Distiller (1804) by Samuel McHarry]  As a towns-person, you could take your horse to a local farm and buy jars of whisky.  This was common across the state on the small farm and homestead in the 1700s.  That is why we refer to Virginia as the birthplace of American whiskey (well before the dawn of bourbon).  In fact, when people started distilling corn mash into bourbon in what is today Kentucky, that land was part of Virginia!  Kentucky didn't become a state until 1792.  So, it may be scandalous to say it, but Virginia is also the birthplace of bourbon!  (Elijah Craig was born and raised in Virginia.)

Before the revolutionary war, the most common spirit consumed in the colonies was rum.  This was due to the high levels of trade between Great Britain, the Caribbean, and the colonies.  Sadly, enslaved African people were part of this trade, along with rum, and were crucial to its production.

Everyone in the colonies drank rum, and lots of it. Men drank it; women drank it; children drank it. But it was more than just a drink. Rum was also used for medicines, tinctures, bitters, solvent, mouthwash and many other uses.

When the colonies rebelled against Great Britain and won the revolution, King George III was pissed. He cut off his supply of sugar and rum from the Caribbean.  No more rum. This led to a huge, and industrial-sized growth in the next ten years of rye whiskey production.  In places like Maryland​ and Pennsylvania, rye whiskey became big factory productions, and rye became the dominant spirit of the mid-Atlantic region, including Virginia.

After the revolution, General George Washington, now retired from the presidency, established a distillery on his farm at Mount Vernon in Virginia, not far from Washington DC.  Washington had been, ironically, responsible for quelling the whisky rebellion in western Pennsylvania, a rebellion caused by the new national government establishing a new liquor excise tax to pay for the debt caused by the revolutionary war.  The rebellion was quelled, but Washington now had the distilling bug in his blood.  He would found the largest commercial distillery during his lifetime, producing predominantly rye whisky.

As the country passed into the 1800's, the cocktail was invented (1804 is the first documented recipe for a "whisky cocktail", later called the "old fashioned whisky cocktail" and later still, called simply the "old fashioned.").  The 1800's saw a huge boom in cocktails and whisky consumption, dominated mostly by the professional bartenders in New York City – and again, the key whiskey ingredient in those Manhattans, Old Fashioneds, etc. was rye whiskey, not bourbon.  Rye was king on the east coast. If you were in the “frontier” (western states like Ohio, Kentucky, Missouri), bourbon was likely your whiskey of choice. If you were in New Orleans, you probably enjoyed mostly cognac. [Ref: Imbibe! by David Wondrich] This regional division in spirits remained the case until Prohibition.

And then Prohibition wiped it all out.  1920-1933. Thirteen years. This is a long time for any industry to survive a total and complete ban on its existence.  Some distillers survived by producing prescription whiskey, but many closed forever. For example, before Prohibition, there were over 30 large factory distilleries in Pennsylvania alone.  After Prohibition, there were none.  And none until the first ones re-established in the early 2000s!  67+ years of nothing.

Back to Virginia  – So it is this love of rye whisky, the history, the terroir, the spirit, that we celebrate with our Catoctin Creek rye whisky.  What does it mean to be The Virginia Rye Whisky?  It means we start in Virginia – our home – with local grain, always made from 100% rye, that is mashed and fermented on site, and – this is absolutely essential – distilled in copper pot stills, and then aged in Virginia and other white oak barrels, soaking up the bucolic Virginia climate while it develops flavor from the barrel.  The final ingredient, natural Virginia spring water, is used to proof the whisky before bottling, adding another key piece of terroir (limestone and minerals in the water impart flavor) into the spirit.  The result is a rye whisky that is authentically made using tradition and the finest agriculture that Virginia offers.

Please be courteous of your fellow diners and our staff and wear your mask.  It's all we ask! 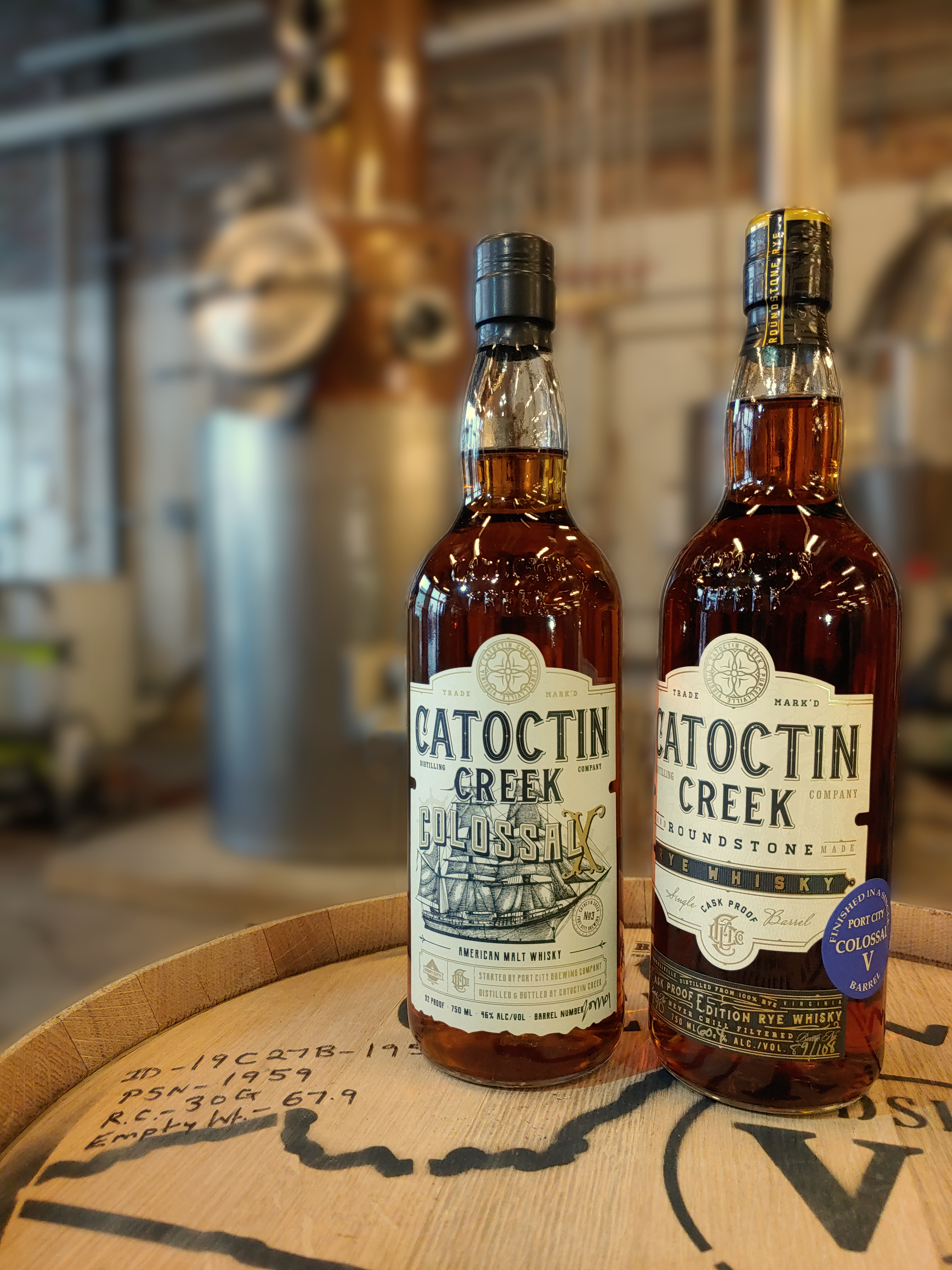 Keep your eyes peeled for the next in our American Malt Whisky series - the "Colossal X."  Releasing on January 11th at 8am in our online store.  This malt whisky was made from their very popular Colossal ale from our friends at Port City Brewing Company in Alexandria, Virginia.  Here's how they describe this annually released ale:

In celebration of Port City's tenth anniversary in 2021, we will be co-releasing this malt whisky with their release of the Colossal X anniversary beer!  You can get both, if you like, and see how wonderfully the distillation process captures the heart and soul of this rich English-style ale.  These bottles are extremely limited, about 600 bottles available from this limited run.

IN ADDITION, we are also releasing a version of our Cask Proof Rye Whisky aged in their Colossal V beer barrels.  So you can have this collaboration TWO WAYS:  cask proof rye or as a malt whiskey made from their ale.  Both are fantastic.

Releasing on January 11th at 8am in our online store.

Art of the Cocktail returns in January!

Catoctin Creek is pleased to present, our SEVENTH year of this six-part educational series on the art of the cocktail. We must still hunker down, as this pandemic isn't over yet. Thus, the classes will still be online via Zoom. Each week, we will send out a shopping list of items for you to pick up, plus the course materials. Then, every Friday night, get yourself comfortably placed behind your bar, with your computer on and ready to go, and we will enjoy the class interactively just as if we were together in person.

This year, we're focusing on WACKY and WEIRD ingredients! Things you wouldn't normally make cocktails with, but can find around the pantry. So BUCKLE UP, baby! This is going to be fun!

Here is the schedule of the series:

Ingredients will be easy to obtain, and the lessons will be fun as ever.  This will be via Zoom, so I still expect lots of interaction and questions and good times.  It's a drinks class, after all!  As I mention in many of my classes, this class will be equal parts, cocktail how-to, history, and fun.

Tickets are ONLY $10 per person for the lessons, which leaves you room to purchase the ingredients.  You can purchase our spirits in our online store. 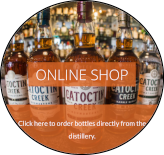 Buy Your Spirits ONLINE for Delivery or Curbside Pickup

Virginia residents may buy your whisky, gin and brandy online!  The Virginia ABC now allows direct-to-consumer shipping!  We are now taking orders in our Online Shop.

If you are outside of Virginia, you may also order for online shipping, here.

Our beloved ambassador, Chad Robinson, came up with this cocktail for a private party for the RAMMY nominations in DC years ago.  Easily batched and poured for the masses, it is reminiscent of a sangria or a grog.  This is a whopper of a punch, so best to save it for once we're all vaccinated, and we need to throw a REALLY BIG CELEBRATION in 2021!

Peel the lemons and 2 of the oranges and set them aside for juicing later. Muddle the peels with the sugar in your punch bowl and let it sit for at least 1 hour until the citrus oils mix with the sugar. This is called oleo saccharum.
Juice your lemons and 3 of your oranges. Mix the juice with the oleo saccharum, making sure the sugar is fully dissolved in the juice. Once the sugar is fully dissolved, add the port, rye and brandy. Add a large quantity of ice to the punch to keep it cool while you're serving it. Slice the remaining oranges into wheels and use the orange wheels to garnish your punch bowl.

Serves at least 30-40 people.  (Save this for your after COVID party!)

See this cocktail and hundreds more on our cocktails page.

Catoctin Creek is proud to be one of the sponsors of WhiskyCast, and if you’re not familiar with Whisky’s longest-running podcast series, we encourage you to check it out. Each week, Mark Gillespie brings you the latest whisky news from all over the world, along with in-depth interviews, tasting notes, and much more. You can listen to WhiskyCast on most podcast apps, smart speakers, and at WhiskyCast.com.

As always, there are lots of fun and information on our Instagram, Facebook and Twitter pages, where you can stay up to date with the daily activities at the distillery. We are open every Tuesday through Sunday for tastings and bottle purchases, so stop by and see us sometime!

Early in 2020, when the country was beset by the COVID-19 pandemic, craft distilleries all across the nation stepped up to fill the void in hand sanitizer, pivoting their businesses to produce WHO-formula sanitizer that was FDA approved. The ACSA...

Wine Enthusiast has culled their list of the Top 100 spirits of 2020 to produce their 30 Best Whiskeys of 2020 list.  Boy, oh boy!  It's great to be included on that list: Catoctin Creek Roundstone Rye Whiskey Distillers Edition; $51...