The very lovely Kayleigh Kulp is the author of Booze for Babes, sold here on Amazon, or available in our distillery store. Kayleigh appeared on WJLA's Let's Talk Live, to promote brandy for the Christmas season.  Of the several brandies she highlighted were our own Catoctin Creek 1757 Virginia Brandy, Pearousia pear brandy, and Short Hill Mountain peach brandy.  Thank you, Kayleigh, for the shout-out!  Merry Christmas!

Nice to get a special mention in the "100 Best" issue of Washingtonian:

Scott and Becky Harris strategically situated their distillery in Purcellville in the heart of Virginia wine country, and even staunch wine lovers admit their Roundstone Rye's warming spice and mellow sweetness are as comforting as a buxom Bordeaux.

In the continuing coverage of the Virginia ABC spirits tax raise, Scott was invited as a guest on the Kojo Nnamdi show on WAMU 88.5. From the show description:

If you live in Virginia, the state’s budget woes will hit you in the liquor cabinet next week. That’s when the price of wine and spirits goes up to help close a projected $2.4 billion revenue shortfall. The price hike is one more reminder that in jurisdictions like the Commonwealth and Maryland’s Montgomery County, where government agencies operate all the liquor stores, consumers often pay higher taxes and levies for their alcohol. We explore the economic forces—seen and unseen—that impact the selection and price of liquor around our region.

The other guest for the show was Garrett Peck, author of "The Prohibition Hangover: A Social History of Alcohol After Prohibition" and "Capital Beer: A Heady History of Brewing in Washington, D.C.".

It was a great show! You can see the original show site, here, or listen to the podcast, here.

Coverage on our decision to hold pricing steady

Both major local newspapers covered our story on our decision to hold prices steady despite a liquor mark-up announced by the ABC.

Richard Barry recently attended one of our distillery dinners for the Autumn 2014 issue of MicroShiner magazine.  The article gives a great window into the sumptuousness of the evening of history, whisky, cocktails, and fine seasonal dining.  The story is further brought to life by the gorgeous photos of DJ Glisson.  The issue even includes cocktail recipes from the evening's drinks.

Each month, Catoctin collaborates with catering mavens Chef Wes Rosati and Chef Maria Aros of the Wandering Chef to create a menu of seasonal dishes that draw on the flavors of local ingredients and Catoctin spirits.  The marriages produced are happy ones like the perfect pairing of Pan Roasted Tenderloin and BBQ Rubbed Brisket with a smooth Boulevardier made with Catoctin Creek Roundstone Rye "92 Proof".

Enjoy the full article here or here, and please join us for one of our future dinners by clicking here.

Coverage on our letter to the Governor

Last week, Catoctin Creek, along with 12 other distillers in Virginia sent the Governor a letter asking him to reconsider his proposal to raise spirits taxes yet again.  We got some very good press coverage on the letter.  We still await the Governor's reply on this issue.

Wash Post letter to the editor: A spiritless proposal to raise taxes

Richmond Times Dispatch: ABC to use liquor markup to modernize the system

AP: Cost of booze rising in Virginia after board vote

Two Gold Medals in One Week! 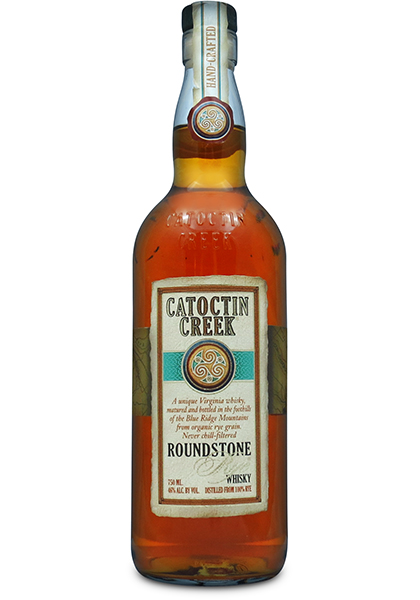 Last week, we learned that we received not one, but two gold medals in a single week!  Fantastic news!!

The Artisan Awards and the Fifty Best both awarded the Roundstone Rye "92 Proof" golds last week!

Thanks go out to Jason Diamond, from Men's Journal, for calling out five American craft whiskeys doing it right!  We were thrilled to be named among other fine whiskey makers like FEW and Dry Fly, producing great new American whiskey:

A bottle of Roundstone Rye 92-proof is what you're looking for if you want your socks knocked off. Just the amount of spice you'd expect from a great rye, but it won't have you breathing fire. If you're looking for something a little more subtle, a bottle of sweet and spicy regular Roundstone Rye should always be within reach. You can't ever go wrong with Catoctin Creek.

While attending the Sage Summit in Las Vegas, Scott was interviewed by Bloomberg Radio about starting his small business, Catoctin Creek Distilling Company.

Lew Bryson, in the summer 2014 issue of Whisky Advocate, (re-)reviews Mosby's Spirit, our beautiful unaged rye spirit, and gives it a score of 82:

The second craft rye I'm revisiting.  Mosby's is still 100% rye and unaged, but the nose is more fun: some green pear and melon esters in there with the grassy rye spice.  It's nicely smooth on the tongue, delivers exactly what the nose promised, plus a shot of fresh-cracked black pepper...and a much longer finish these days.  Greatly improved; a good white whisky.

Lew also reviewed the Roundstone Rye Cask Proof (batch B12E1), but he didn't find it as pleasing as we do, scoring it a 77.  Being honest, the review disappointed us, especially considering the last review from Whisky  Advocate was clamoring for more age, and now that we have it, they consider it over-oaked.  We truly struggle to see how a whisky that is less than two years old could be over-oaked in 30 gallon barrels.  Anyhow, in the interest of transparency, here is that review, for what it's worth:

Single barrel, cask proof.  Strong wood aromas; pencil shavings, hot-sawn oak.  Hot and tight, intense wood.  There's some interesting stuff around the edges, but the wood's blocking it till some sweetness peeks through at the end.  Water helps a little, but not enough.  Over-barreled.

M. Carrie Allan, spirits writer for the Washington Post, gave us great coverage in the Food section, announcing the release of our new 92-Proof version of the Roundstone Rye:

Catoctin Creek has been curating the barrels it has tucked away, tasting and selecting a few hundred that seemed to be developing deeper and more interesting flavors, and holding them back to use in this release. As a result, the new rye is not only less diluted, but also, at just under four years in barrel, a bit older than the current Roundstone.

That said, Becky says that many old-school whiskey buffs put too much emphasis on barrel age. “I kind of compare it to taking your dog to a dog show, right?” she says. “When people evaluate a rye whiskey, they want it to taste like other whiskeys they’ve had — the ‘breed standard.’ . . . I like to think the craft distilling movement is trying to bring some new dogs to the show, but the show that’s out there — and I’m just rolling with this metaphor now — is run by the people who are deeply invested in a very old stock style of whiskey.” Many younger craft brands, she says, don’t have very old whiskeys. “But they are amazing whiskeys. They may not be a purebred English mastiff, but it’s an amazing dog in its own right.”

Read her full story, plus a great new recipe with the Roundstone Rye 92, here.

Loudoun County and Catoctin Creek Featured in the Philadelphia Sun

Renée S. Gordon does a travel feature for the Philadelphia Sun, and this time, she turns her sights on Loudoun County, and our deep collection of history, entertainment and gastronomic treasures.  Happily, Catoctin Creek gets a call out:

Catoctin Creek Distilling Company is in the heart of Purcellville and is the first legal distillery in Loudoun County since before Prohibition. Owners Becky and Scott Harris create small batch liquors that are entirely handcrafted. They make 40,000 bottles annually including their version of moonshine. Distillery tours and guest bartender events are offered.

Catoctin Creek is another of my “amazing females” sites. Becky Harris, a chemical engineer, is the distiller. She is one of the few in the country and [one of a few] female distiller[s] on the East Coast.

[Corrections noted above are our own.]